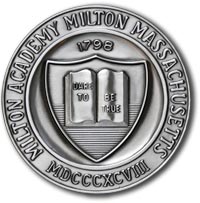 Trustees do not confer awards, typically, at Milton. The Milton Medal is the exception. Established by the board in December 1982, the Medal considers candidates from the ranks of trustees, faculty and administration, and alumni or parents. On Reunion Weekend this year, trustees will make this prestigious award to H. Marshall Schwarz ’54 and Franklin W. Hobbs ’65.

The Medal recognizes extraordinary volunteerism on Milton’s behalf. These two graduates’ service as trustees and board leaders each spans five heads of school. They significantly strengthened Milton’s financial position, and addressed, with energy and generosity, the emerging and diverse needs of an historic School and a tradition of academic excellence.

Trustees have honored 31 individuals in the 29 years since they established and described the award. The most recent recipient was trustee and Milton parent George A. Kellner, who received the award in 2008.