A Championship Season for Milton Tennis 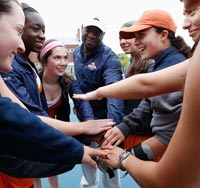 With ace serves and slicing backhands, the girls’ varsity tennis team dominated the courts of the Independent School League this season, going undefeated (15–0) and earning the title of ISL Champions after beating Nobles on Friday. The team also earned the NEPSAC Championship trophy over tough competitors.

Coach Troy Crichlow ’99 described this season as a perfect culmination of the team’s strong results over the past few years. The team’s top-ranked player, Maddie DeWire (III), had an outstanding season, winning all of her single matches.

“Tennis season is the most fun time of the year for me,” says Maddie. “We are such a close team, and we were excited and confident this season.”

Co-captains Kaitlin Gately (I), Abby Lebovitz (I) and Ilve Bayturk (I) led the team, which included three freshmen. Semi Oloko (IV) and Te Palandjian (IV) were ranked second and third, respectively, on the team.

“Our youngest players fit right in right away,” says Coach Crichlow. “They had a good understanding of what we were trying to accomplish this season.”

The boys’ varsity team also had a standout season (16–1), winning the ISL Championship under the leadership of captains Alex Lee (I) and Andrew Hahm (II).