A Christmas Carol, tenderly reshaped for the 21st century 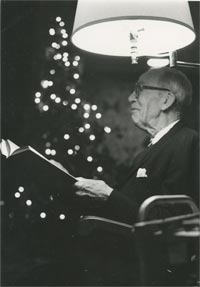 If you dare update a classic, or alter a beloved tradition, you need to tread carefully. Jesse Kornbluth ’64 put aside any fears and tackled the classic of all Christmas tales. He contemporized a 19th century story that meant much to him when he was a Milton student.

According to Jesse, Milton was “staunchly traditional” in the early ’60s. He and his classmates addressed faculty as “sir” and sipped tea in real china after football games. His favorite tradition was a reading of A Christmas Carol in Straus Library by headmaster Arthur Bliss Perry the night before students went home for the holiday break.

“Mr. Perry entered and took his seat. And then he became Charles Dickens. He read without accent and without drama. He didn’t play up the sentiment. He simply delivered—as he had each December for 14 years and would for two more—the greatest Christmas story since the original one. I got shivers. Maybe shed a tear. It was that remarkable an experience.”

Last December, Jesse tried recreating this experience for his almost 9-year-old daughter. If a roomful of adolescent boys could sit there engrossed, then certainly his daughter could, he thought, but “she lasted five minutes.”

Rather than blaming “kiddie television and an overly permissive culture,” Jesse Kornbluth set out to update Dickens’s tale.

“My goal wasn’t to rewrite Dickens, just to update the archaic language, trim the dialogue, cut a few extraneous characters—to reduce the book to its essence, which is the story. I think of my words as minor tailoring, like sewing on a missing button or patching a rip at the knee.”

The result is half the length of the original, and “it means to convey the feeling of London in 1843 without the formal diction and Victorian heaviness. It means to be a story that adults can read to their children right to the end, and that children can read by themselves with pleasure.

“This Christmas, I’ll sit near a glowing fire in our living room and read Christmas Carol to our daughter. Unlike Arthur Perry, I’ll amp up the drama, the better to keep her interested. Unlike the young Jesse Kornbluth, our child will say the story wasn’t all that interesting. No matter. In a world that can’t kill off traditions fast enough, this is one worth keeping.”

Find the Kindle edition of “Christmas Carol” on Amazon.com.