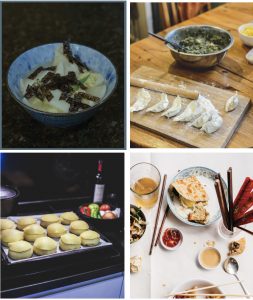 When Katie Chow ’12 was growing up, her parents would come home from Boston’s Chinatown with white boxes wrapped in red string and containing favorite treats for her and her siblings: pastries such as dan tat (egg tarts) or bolo bao (pineapple buns).

“For us, love is a surprise box of buns, even though your fridge is packed; dad giving you the last helping of fish when you know it’s his favorite, too; and spending Sundays helping mom fold wontons that will live in the freezer for months,” Chow writes on the Instagram page for the Asian Inclusion Project, a joint venture with Ashley Bae ’12.

For Bae, a Los Angeles native and daughter of Korean immigrants, food connects across generations. As a child, Bae peppered her paternal grandmother with questions as the older woman experimented with fermentation for kimchi and cooked a spicy seafood stew from her youth in Guryongpohang, a port city at the southeastern tip of South Korea.

“When I cook comfort foods that remind me of my childhood, I’m really cooking food from my grandma’s childhood, because I grew up watching her,” Bae says. “There’s something beautiful about how a routine activity like cooking can mean so much for a culture.”

“For us, love is a surprise box of buns, even though your fridge is packed; dad giving you the last helping of fish when you know it’s his favorite, too; and spending Sundays helping mom fold wontons that will live in the freezer for months.”

Bae and Chow formed the Asian Inclusion Project (on Instagram at @asianinclusionproject) out of their mutual desire to amplify Asian American voices and invite others into the Asian American experience. Food is a natural medium: In many cultures, sharing food is an expression of love, celebration, and community. The project shares submissions from chefs and amateurs alike—people with diverse stories and Asian American identities in common.

Bae and Chow hadn’t kept in touch beyond a social media connection since their graduation from Milton, but news reports about a recent increase in hate crimes against Asian and Asian American people, sparked a conversation between them. It eventually led to their creation of the Asian Inclusion Project.

They both felt helpless and angry about the violence. Several of the victims were elderly people, creating an additional layer of horror because reverence for elders and ancestors is central to many Asian cultures.

“AIP is our way of celebrating and starting a productive conversation about the diverse ways to be Asian American,” Bae says. “We chose to tell stories of food because food has the power to unify.”

Chow, a marketing specialist who now lives in Bucharest, Romania, continues: “I find myself asking my parents mainly for Chinese recipes as a way to feel connected to them. Though their food is always better, cooking their recipes makes me feel a bit closer to home.”

Bae spent countless childhood hours in LA’s Koreatown at the New Seoul Restaurant, which her maternal grandparents have owned since the mid-1980s. Today she is a graduate student at the University of California-Santa Cruz, working toward her Ph.D. in sustainable aquaculture.

“I live and breathe books about food, articles about food, and I love to cook,” she says. “I’m always food-forward, whether it’s intentional or not. My parents used to laugh at me, because whenever I learned a Korean word, like gyerhon (marriage), I’d always remember it in the context of a food word, like gyeran (egg).” 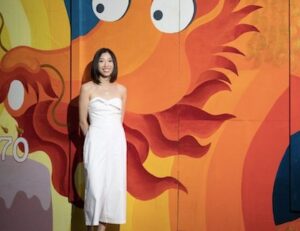 Chow craves the flavors of home daily: steamed fish with ginger, cilantro, and soy sauce with steamed egg and rice. She has lived abroad for years, but when she’s home in Boston, takeout from Peach Farm, in Chinatown, is a must. When Bae feels homesick for the flavors of her family, she whips up Korean staples, including doenjang jjigae, a stew that uses savory fermented soybean paste (doenjang) as a base and is full of soft zucchini, onions, radishes, mushrooms, scallions, and tofu. It’s eaten with rice and, of course, banchan, the numerous side dishes that accompany any Korean meal.

Dishes shared on the @asianinclusionproject Instagram account include recipes and personal stories representing a broad range of Asian American life.

No singular “Asian American” cuisine, culture, or experience exists. Asian Americans and Pacific Islanders claim heritage from places as far east as Japan and the Polynesian islands and as far west as Lebanon and Turkey. The seafood stew Bae considered a Korean staple as a child was informed by her grandmother’s access to Japanese food in Guryongpohang. Variations in climate, availability of ingredients, religious traditions, and family and cultural norms are among the many factors that influence the cuisine of a place. Cultural intersections combined with American palates result in the broad and extremely diverse range of Asian American food.

“The Asian Inclusion Project is a medium for people to explore foods that are meaningful to them, and part of how they grew up or live now,” Chow says. “We want to support traditions as well as Asian American restaurants and chefs that are experimenting with flavors and doing exciting new things.”

Sydney writes in her post, “There’s a Filipino quality that I love so much—that even if someone wasn’t expecting you, they’ll pull up a chair and make room for you. This dessert, which I have only when I’m in the Philippines, symbolizes that openness and vibrancy, that bahala na attitude, which translates not to resignation but trust that even if it looks risky, it will turn out OK at the end.” 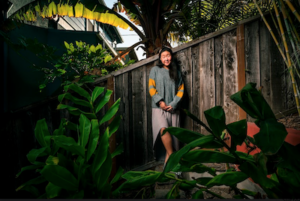 COVID-19 hit Asian American communities particularly hard. Closures of restaurants and other service- and hospitality-industry businesses created devastating unemployment among Asian Americans and in the country’s Chinatowns. Anti-Asian racism was stoked by government leaders using anti-Asian catchphrases and blaming China for the virus.

Chow turned to her father for guidance. Born in Hong Kong, her dad moved to Mississippi during the civil rights movement and later to the Boston area where, at Brandeis in the 1970s, he was active in the Asian American community and with organizations in Boston. Today, both her parents are involved in Boston’s Chinatown, where her mom is on the board of the Boston Chinatown Neighborhood Center.

“These systemic and racial issues have been present in America for a long time—from the Chinese Exclusion Act to Japanese internment and beyond—and you can’t separate the Asian American experience from these types of hostilities,” Chow says. “The best thing you can do is be cognizant of how you’re feeling, share those feelings, and channel them toward something better.”

In highlighting Asian American food traditions and innovations, Bae says, they hope the Asian Inclusion Project will connect people with their own identities and raise awareness about issues currently facing Asian Americans. It can also help to expand understanding of the diversity, complexity, and richness of the Asian American experience. “It speaks to people’s resilience,” she says. “My own relationship with being Korean American has really strengthened in the past few years. My identity is ever-evolving, the more I learn about and celebrate my heritage.”

This story first appeared in the fall 2021 issue of Milton Magazine.