A Listener In Morocco, Shaheen Bharwani (I) Is A Storyteller At Home 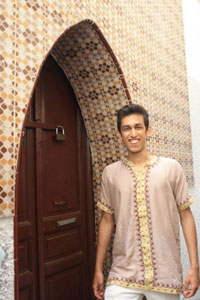 Walking the bustling, friendly streets of Rabat is a happy memory for Shaheen Bharwani (I), who plunged into the Arabic language and customs of Morocco this summer.

“Interacting with strangers in Morocco was easy,” says Shaheen. “They treated me like a friend and made me feel so welcome. The man at the end of my street invited me to tea one day while I was on my way to school. So we sat together before I headed off.”

Shaheen earned his six weeks in Morocco as a result of the National Security Language Initiative for Youth (NSLI-Y) program funded by the U.S. State Department. The program looks to increase the number of Americans learning, speaking, and teaching critical-need foreign languages, like Chinese and Arabic. Shaheen was selected and awarded a scholarship to travel with 15 other students, who lived with host families in Rabat. He spent five days a week in the classroom studying Arabic, including lessons in the local Moroccan dialect and Arabic calligraphy. During free time, students toured famed locations of the region: the Sahara Desert, Ibn Battuta’s tomb in Tangier, the market square of Marrakech, the palaces of Meknes, and the winding souks of Fez.

Shaheen grew up speaking both English and Urdu, and has studied Spanish, German and French. This was his first time studying Arabic, although he was familiar with the language.

“I’m Muslim, so I have deep connection to the language,” says Shaheen. “I say some of my prayers in Arabic. I am also interested in pursuing Arabic studies in college.”

Celebrating Ramadan in Rabat was an added bonus, Shaheen says. “People have so much fun with the celebration. I wasn’t expecting that,” he says. “Even though we were fasting during the day, everyone was so happy! At night, we all just let go and had a great time. The markets were crowded late into the night—the whole celebration was busy and festive.”

His experience in Morocco has inspired Shaheen to represent the United States abroad in a more official role. As he learned from this trip and earlier visits to Egypt, Kenya and Pakistan, “one of the easiest and most effective ways to connect with people is through language and culture.”

Reflecting on his experience, Shaheen writes: “Ibn Battuta said: ‘Traveling—it leaves you speechless, then turns you into a storyteller.’ Speechless I was, when I beheld the dunes of the Sahara and the metalwork lamps of artisans in Fez. Throughout my stay, I often remained silent, soaking in the novelty of my surroundings. Upon returning home, I find myself frequently relating anecdotes from my summer experiences. There, I was a listener. Here, I have become a storyteller.”