A Math Assembly? “Guts” Competition Likely to Become a Tradition 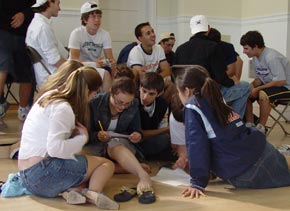 Would you have imagined that the Math Club assembly would attract a large and noisy crowd? At Milton’s weekly assembly on Wednesday, May 11, the Math Team hosted a 10-round “guts” competition. The event drew students enough for approximately 30 teams, each consisting of five students from Classes II and III. The teams—after choosing names that were then mounted on the scoreboard—solved problems in sets of three. A team member ran with the answers to Math Club members who quickly graded the answers and posted points for the team on the “Excel” scoreboard. Team members watched the updates of their own and other teams’ scores as the numbers appeared on the projected scoreboard. The competition was intense and great fun—as teams scored, cheers erupted. No team lost valuable time between problem sets. Plenty of eager ideas about how to approach a problem surfaced. Scores mounted. Students vied for prizes as well as recognition as master problem-solvers. Prizes took the shape of food—always welcome—and no one left disappointed with the event.