A New Look for the Mustangs 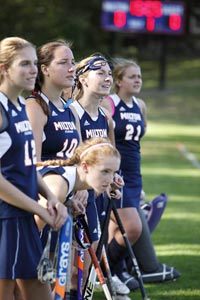 Last spring, Head of School Todd Bland appointed a committee and charged the group with developing a new and consistent identity for Milton athletics. The committee is now happy to introduce the design that Mr. Bland has approved as the School’s official athletics logo. All of Milton’s athletic wear, formal and informal, from this point forward, will use the new design. Clothing and products that use designs from within this logo group will soon be available in the School bookstore, as well.

A student vote in the 1982–1983 school year triggered adoption of the Mustang as Milton Academy’s mascot. Before that time, Milton teams had been known only as “orange and blue.” Use of the Mustang as part of our teams’ identity grew, and teams adopted various, disparate graphics and images. To develop a single, strong institutional athletics identity, a group that included the athletics department, administrators, faculty, the student activities office and the communication office began to meet and to work with a design team.

The committee hopes that the result represents the energy and spirit of the Milton Mustangs.

The design includes numerous options for implementing a graphic treatment, and at the same time ensures that Milton has a consistent look.  The set of designs available for teams includes the Milton “M,” used at Milton Academy since 1886. The Milton “M” came to be affectionately known as the “Stoky M,” in honor of Herbert G. Stokinger ’24, beloved director of athletics and physical education for over 40 years.

With a consistent look across teams, students, faculty, parents, alumni and fans—whether they are in uniform or simply wearing Milton gear—can instantly communicate their spirit, and their pride in Milton’s continuing tradition of athletic excellence.