A Special Day at Milton: Mustangs Go for the Gold 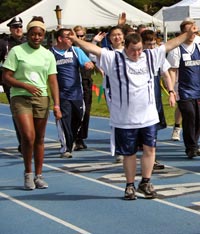 Athletes from Milton-Quincy Mustangs—along with student volunteers and members of Milton and Massachusetts law enforcement—carried the torch on Stokinger Field during the opening ceremony of this spring’s Special Olympics track and field competition. Spending Sundays together, the athletes practiced with Milton Academy students, readying themselves for this big day. The event—hosted on campus this past weekend—represents the culmination of a year of hard work and training, as well as the beginning of friendships between athletes and volunteers.

The opening ceremony on May 19 kicked off the largest event of its kind at Milton, with over 700 athletes from 32 teams participating from around the greater-Boston area.

“This massive effort was made possible by the enthusiasm and hard work of 200 volunteers who helped set up for the day’s events, register athletes, run the games, award medals, serve lunch, paint faces, and clean up,” says Andrea Geyling, director of community service at Milton.

View photos from the day taken by Jade Beguelin (II).