A Transformative Evening for Annabell Asare ’16 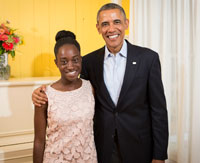 Annabell Asare (II) was focused on a career as a politician. Her chance to meet President Barack Obama was an amazing opportunity, but it was also life-changing in ways Annabell didn’t expect.

“The event was so exciting,” says Annabell of the fundraising dinner held on Martha’s Vineyard last summer. “There was so much coordination of the president’s arrival and the security to get into the event. I always thought of politicians as sitting in their office doing their work, but that night I realized that the job is more like being a celebrity with the press coverage and the constant interaction, greeting and meeting people. Your life is not your own. I always thought I would be a politician, but I now know I want to work behind the scenes, maybe as a lawyer working on legislation or in public relations at the West Wing.”

At Milton, Annabell is a natural leader, sitting on the student board of the Latino Association and Habitat for Humanity. She is also a member of Orange and Blue Key, leading prospective students and their families on campus tours. She came to Milton from Beacon Academy, a 14-month program between eighth and ninth grades for promising and motivated students from Boston and surrounding urban areas. She was interning for the program last summer when the opportunity arose to attend the fundraising dinner with Beacon Academy trustee Michael Rubenstein. She sat at a table with Senator Michael Bennet of Colorado and also spent time talking with Senator Ed Markey of Massachusetts.

“After speaking for a few minutes, the president took questions from the audience, mostly about hot political or diplomatic topics of the day,” Mr. Rubenstein said later about the event. “Annabell, the star of the Q&A, asked him simply why he moved back to Chicago after finishing Harvard Law School. He took her question and spent five minutes expounding on his [answer]. It was a star moment for Annabell, and he referred back to her again in his closing remarks.”

Annabell says she asked the question, which elicited an atypical reflective answer from the president, because she was curious why he chose to go back to where he started when the whole world was open to him with his Harvard Law degree.

For now, Annabell is focused on academics, not politics. Latin is one of her favorite classes, as is Reading Consciousness, an English class. “I really enjoy Reading Consciousness because it’s discussion based and focused on your thought process,” says Annabell, who lives in Robbins House. “It’s about defining the notion of humanity and we study literature, philosophy and religion.”