A Weekend of Music 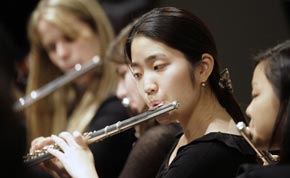 The first of the weekend’s concerts began on Friday at 7:30 p.m. with performances from the Chamber Orchestra and full orchestra. The Chamber Orchestra opened with two concerto movements of Mozart and highlights included soloist Clare Choi (I), Kelsey Hudson (I) on violin and Christopher Chang (I) on viola. The full orchestra opened the second half of the concert with two virtuoso pieces for violin and orchestra. Alyse Wheelock (I) performed the Legende of Polish composer Henri Weiniawski and Nina Monfredo (I) played the showpiece Praeludium and Allegro of Fritz Kreisler. The concert concluded with three diverse pieces of the mainstream orchestral repertoire, the Berlioz Roman Carnival Overture, the Overture to thePirates of Penzance by Arthur Sullivan and one of the classic Dvorak Slavonic Dances.

Sunday’s performance—the twentieth annual Jean McCawley concert, named for Milton’s long time music head—featured the Milton Academy Chamber Singers, Gospel Choir and Glee Club. The Chamber Singers opened with Schubert Mass in G, featuring many student soloists, and continued with a piece written by faculty member Ted Whalen, “Thy Kindness Shall Not Depart from Me.” Milton’s newly formed Gospel Choir, under the direction of Lori Dow and Louise Mundinger, performed four works ranging from spirituals to contemporary Gospel numbers. A varied performance by the Glee Club included the ladies singing “La Lluvia,” based on an Ecuadorian panpipe melody, and the gentlemen singing the famous “With Cat Like Tread” from Gilbert and Sullivan’s Pirates of Penzance. The concert concluded with two contemporary numbers of Chapin and Thomas.