Advertising’s Power in the World of Alcohol, Tobacco and the Image of Women: Expert Jean Kilbourne is the 2008 Talbot Speaker 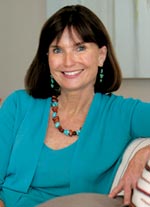 Jean Kilbourne, internationally recognized for her pioneering work on alcohol and tobacco advertising and the image of women in advertising, visited Milton on Wednesday, November 19, as the Samuel S. Talbot Speaker. Dr. Kilbourne is the co-author of the recent book So Sexy So Soon: The New Sexualized Childhood and What Parents Can Do to Protect Their Kids.  Her first book, Can’t Buy My Love: How Advertising Changes the Way We Think and Feel, won the Distinguished Publication Award from the Association for Women in Psychology.

The award-winning films based on her lectures include Killing Us Softly, Spin the Bottle and Slim Hopes. She has been interviewed by many magazines and newspapers, and is a frequent guest on radio and television programs, including The Today Show and The Oprah Winfrey Show.

Dr. Kilbourne has served as an advisor to the Surgeon General and has testified for the U.S. Congress. She holds the honorary position of Senior Scholar at the Wellesley Centers for Women.

She has received many awards, including the Lecturer of the Year from the National Association for Campus Activities. The presenter of an award from the American Federation of Television and Radio Artists said, “No one in the world has done more to improve the image of women in the media than Jean Kilbourne.”

Dr. Kilbourne spoke during Wednesday’s assembly in the Fitzgibbons Convocation Center and met with students and faculty during a reception in Straus Library immediately following the assembly.