“All for one, one for all” in the Class IV Play 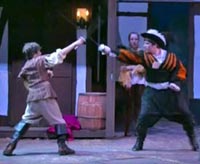 King Theatre stage became 17th-century France this weekend, complete with clashing swords. The performing arts department, and Milton’s newest students, presented The Three Musketeers as this year’s Class IV Play. The Class IV Play is a long-standing tradition at Milton and an all-inclusive and beloved class project. Faculty member Robert St. Laurence directed this year’s production based on an adaption of the novel by Alexandre Dumas about the adventures of a young man who travels to Paris to join a group of the royal military known as the Musketeer of the Guard.

Thirty-seven Class IV students were involved in this year’s cast, and those not performing on stage contributed behind the scenes, acting as ushers, designing posters, and joining the audience in support of their classmates.