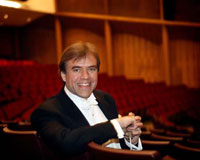 Alumnus Christopher Wilkins ’74 recently became the music director of the Boston Landmarks Orchestra, which performs orchestral music in significant architectural, historical and geographical settings throughout the Boston area. Founded in 2001, the Orchestra’s mission is to perform exceptional orchestral concerts, free to the public.

Christopher was appointed to his new position earlier this spring after a nationwide search. Last summer he assisted the Orchestra when founder and conductor, Charles Ansbacher, fell ill. Christopher led the Orchestra during a memorable concert at Fenway Park, where he conducted Beethoven’s Ode to Joy from atop the bullpen. The event also reunited Christopher with Milton classmate and Massachusetts Governor Deval Patrick ’74, who narrated a story accompanied by the Orchestra.

At Milton, Christopher was an accomplished oboist and a member of numerous music ensembles. “I must have played Bach’s Jesu, Joy of Man’s Desiring at least 300 times,” he laughs. “It ended up being my thing, and I played it with the choir at all kinds of events in the Apthorp Chapel.”

Christopher also spent time in the Chapel with retired music faculty member Richard Griffin, who taught him how to play the “magnificent” George Sloan Oldberg Memorial pipe organ, which at the time was newly installed. Although music was his primary focus at Milton, Christopher went on to study pre-med at Harvard, then immersed himself in East Asian Studies. The chance opportunity to conduct the student-run Harvard Bach Society Orchestra changed the course of his career. He went on to study music and conducting in Europe and then at Yale University

In addition to his work with the Landmarks Orchestra, Christopher will continue to serve as music director for both the Orlando Philharmonic Orchestra and the Akron Symphony Orchestra.