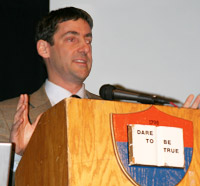 On December 16, Paul Sabin, Class of 1988 and the sixth Henry R. Heyburn Lecturer, talked with students in Classes II and I about climate change, energy politics and history. A professor of history at Yale University and director of the school’s undergraduate environmental studies program, he explained how historical analysis can—and should—influence our approach to climate crisis and energy policy.

Focusing his career on both environmental action and academia, Professor Sabin says that “the tension between ideals and pragmatic action has always been central to [his] life and work.” Political activism and academic life can seem at odds with one another, but they intersect dynamically when the goal is to affect climate change. Paul claims that our actions now, directed toward the future, must reflect fundamental historical truths. A greater appreciation of history prepares us for making informed and constructive policy choices and better guides proposals for further action.

“History, however, can act as a roadblock when we rely on historical myths,” Paul says. His lecture debunked some of these misconceptions, such as the idea that settlement patterns (a car-dependent lifestyle) and consumer behavior in the United States are fixed and unchangeable, or that past competition among states and nations show that cooperation on climate policy is impossible to attain.

For the past century, he notes, political choices have effected oil consumption and production, that a free market in energy has never been the case. Energy policy has always been shaped by politics—tax policy, public land policy, labor law, environmental regulation. His examples demonstrated how rising energy and transportation developments have historically been rewarded by privileges that enhance their dominance.

“A solution that eliminates greenhouse gasses is the goal,” Paul said, “and if government action is required to promote the energy change necessary, we have to understand what role government played in the energy market in the past.” He argued that political power, social values and economic interest will affect a new energy regime as much as technological efficiency and availability.

“Our ambitious 2050 goal [of changing fuel use] is conceivable. While the transition that we’re hoping for is historically unprecedented, it is possible.”

Paul received his undergraduate degree in history and environmental studies from Yale and earned his Ph.D. in American history from University of California, Berkeley. His book Crude Politics: The California Oil Economy, 1900–1940 was published in 2005, and his essays on energy politics and leadership development have appeared in the Boston Globe, the Chronicle of Higher Education, theChicago Tribune and Legal Affairs.

Paul serves on the board of the Environmental Leadership Program, which he founded in 1997. This nonprofit, national network of more than 450 educators and leaders in government, business and nonprofit organizations trains new generations of environmental leaders characterized by diversity, innovation, collaboration and effective communication.