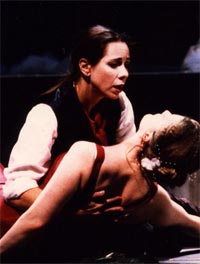 Fredrika Brillembourg P’10, acclaimed for her luminous, rich voice as well as her charismatic portrayals of leading mezzo roles, performed at Milton on Sunday, December 6 in Straus Library. As a member of the ensemble at the Bremen Theater from 1995 to 2001, Ms. Brillembourg sang Carmen, Charlotte,Octavian, Cherubino, Orphée, Marguerite and the Composerand was the only singer in the history of the Theater to win both the Kurt Huebner Prize and the Bremen Volksbuehne Prize.  Most recently, she made her debut at the Washington National Opera in concert performances at the Kennedy Center of Wagner’s Götterdämmerung singing the First Nornand Flosshilde.