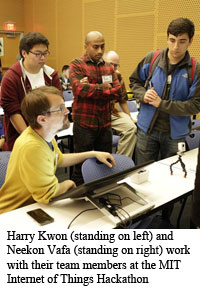 Neekon Vafa (I) and Harry Kwon (I) took their computer programming skills to a whole new level when they participated in—and placed first at—MIT’s Internet of Things Hackathon earlier this month. A hackathon is an event in which computer programmers and software developers collaborate intensively on software projects.

“The spirit of a hackathon isn’t competitive,” says Harry. “Everyone goes there to learn, even the most experienced programmers.”

Most of the attendees are working professionals; Neekon and Harry were the only high school students participating. Over the summer, Neekon added his name to MIT’s waitlist after researching various hackathons. The night before the two-day event, Neekon received word that he was in, with a couple of extra tickets included.

The event kicked off with team leaders pitching their projects. Participants then choose which team they wanted to join. Neekon and Harry picked the “Perfect Playlist” project, which involved programming dynamically adjusting playlists that use sensors to read the atmosphere of the room. For example, at a house party, the sensors might pick up that it’s time to play a dance song.

“Although we were younger than the other team members, we both understood what they understood and what they were saying,” says Neekon. “We also contributed our own ideas and felt very comfortable as part of the team.” Harry and Neekon are both taking Mr. Hales’s Programming Applications class this semester.

When work was complete, each team presented its project to the judges. Neekon and Harry’s team was awarded first prize. The prize included tickets to the main Internet of Things conference the following week, which Neekon and Harry attended for one day.

“We learned a lot of actual programming and engineering at the hackathon,” says Harry. “The event also gave us an idea of what real software engineering is like. Now I see how the whole process works, from designing and building the product to working efficiently as a team.”