An artist and an activist, Derrick Ashong is this year’s Martin Luther King Speaker 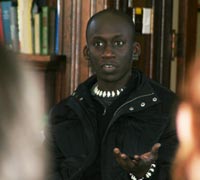 On January 13, the Milton community honored the memory and the work of Dr. Martin Luther King, Jr.—a learned, intensely thoughtful and thought-provoking man—by hearing from a man who leads his life with a vision that is just as compelling for our time. Mr. Derrick Ashong is an activist, an artist, an intellectual, and his exhortation to students on Wednesday was that they listen to each others’ stories, discover the truth behind their own, and—in light of that understanding—give to those in need, an act beneficial for all.

Mr. Ashong is truly a global citizen. Born in Ghana, he lived as a child in Brooklyn; then in Riyadh, Saudi Arabia, and Qatar; and then found himself as a 16-year old in a New Jersey high school. His experiences taught him how important it was to be aware of where he was, and equally aware of who he was. He came to enjoy stepping outside his comfort zone and living in the space between different cultures. “This globalizing world,” Derrick said, “is increasingly becoming more representative of how I grew up than how some of my friends grew up.”

Trained in classical piano, Derrick is a self-taught guitarist, a natural performer, and a songwriter who was involved in theater throughout school while learning to communicate his thoughts through poetry. While a student at Harvard University, Derrick met his current band members while performing in the Kuumba Singers, a university choir. Before completing his studies, he took a leave of absence to perform in Steven Spielberg’s film Amistad. He returned to Cambridge to finish his degree, and then began to pursue a Ph.D. in African-American Studies and Ethnomusicology. Right now, he is pursuing his artistry and advocacy full-time.

Derrick’s thoughts on Senator Barack Obama make up some of YouTube’s most viewed videos of 2008. He leads the emerging band Soulfège. His lyrics won Billboard Magazine’s 2007 World Song Writing Competition. His acting ability brought him to the role of Buakei in Amistad. Through all these expressions of artistry, Derrick inspires, engages and activates young people with positive messages for social change.

Derrick has lectured on five continents on the use of media as a tool for human development, including recent talks at the London School of Economics, King’s College (Cambridge), the Reconciliation Forum in Washington, D.C., the United Nations Alliance of Civilizations, and before the UK Parliament on the subject of “The Obama Generation.” He is a member of the internationally recognized Next Generation Leadership Forum, a participant in the Arts & Entertainment task force of the U.S.-Islamic World Forum, and a contributor to Oprah.com.

Derrick describes himself as a social entrepreneur dedicated to building bridges between the fields of business, media, technology, youth culture, pop culture and politics. He is the founder of Take Back the Mic, a youth-centered cultural movement that encourages young people to take leadership in four key areas of life: Art, Society, Business & Politics. Learn more about Derrick Ashong and his work at www.derrickashong.com.