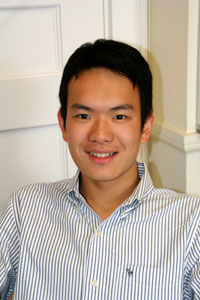 In third grade, Matt Chen (II) was in a bookstore with his family when he spied the cover of Airways magazine, an international trade publication focused on commercial flight. He took the issue home, and Matt’s fascination with aviation was launched. In addition to extensive reading, he collected die-cast plane models and spent countless hours on an online flight simulator.

Today, Matt is a published writer in the same magazine that fueled his interest. Since November 2010, he has written three featured articles that constitute a series on the airline industry in China, including Taiwan and Hong Kong. Matt has lived in all three places, speaks Mandarin fluently, and understands some Taiwanese and Cantonese.

“One day last spring, my friends and I were sitting on the quad and we saw a plane fly over. They knew of my interest and we started talking about planes—they encouraged me to share my knowledge.”

Matt contacted various magazines, and Airways was interested in his idea that the airline industry in Asia needed more extensive coverage. His articles are general reviews that include the history of the airlines, their strategies, strengths and weakness. He conducts extensive research and analyzes the entire fleet of each airline. His review of the Korean airline industry will come out sometime this fall, and he has plans for future articles that look at various Southeast Asian airlines.

Matt immersed himself over spring break with an internship at Boeing in Shanghai. He worked in the supply chain department and in the hangar where he took down parts in the cockpit of an Aerosvit 767-300ER. This summer he will work for Air China for four weeks.

“I’m excited to pursue a career in this industry. It can be a difficult industry to work in, but I’m hoping these experiences give me a head start.”