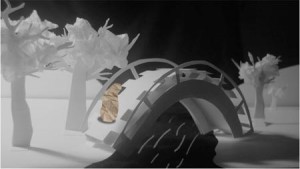 For Yoshi Makishima ’11, animating a story is a way to put your stamp on every aspect of it. The animator is a director, writer, designer, and actor, making choices that affect everything from characters’ personalities to the overall tone of a film.

Yoshi’s short film, “Night,” was an official selection at this summer’s San Diego International Kids’ Film Festival. She submitted the four-minute piece after completing it for a class at the Harvard Extension School.

Yoshi, a performing arts faculty member in Milton’s Middle School, began animating when she was a student in the Upper School. For her senior project, she worked with former modern languages teacher Mary Jo Ramos to animate Spanish stories for Middle School students. After Milton, Yoshi attended Smith College, where she majored in English, and she took animation courses at the University of Massachusetts, Amherst.

“Night” follows an unidentified figure through a city covered in darkness to a forest. Yoshi made the character genderless, ageless, and without other identifiers in order for viewers to relate to the figure. The inspiration came from a summer with repeated electrical blackouts; Yoshi found the sudden plunges into darkness and quiet to be isolating.

“I spent a lot of time in the dark, which made me think about light, and the absence of it, and how lonely that can feel,” she says. “It was a major inspiration, and something I thought a lot of people might relate to.”

Having an official selection at a film festival means the festival organizers chose Yoshi’s to screen. The screenings happened in small groups, and the film that won her category was in Yoshi’s group. Yoshi couldn’t attend the festival: It happened the same time teachers were preparing for this academic year.

Yoshi was able to share “Night” with a special audience of tough critics: her students. Many showed genuine interest in the film and animation in general. Yoshi is thinking of ways to incorporate animation into the School in some way—perhaps through a workshop, if scheduling allows. She would love to see more girls get into filmmaking.

“It does seem like there’s a real hunger for it, especially at this moment in time,” she says. “The kids are so comfortable with computers and they’re also media literate in a way that is astounding and exciting. Making films used to be so much more of a niche interest. It used to be something you’d have to go out of your way to learn about. But it’s a language these students are so comfortable speaking.”