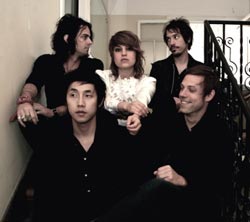 Alumna and viola player Anna Bulbrook might never have imagined that she would be the musical guest on the Late Show with David Letterman, or that she would sell-out a performance at Boston’s famed rock-haven the Paradise Lounge, or that she would find herself on a whirlwind musical tour of 30 shows in 30 days. Anna has done all that and more as the sole female member of The Airborne Toxic Event, one of this year’s most talked about rock bands.

The Airborne Toxic Event—named for a phrase from Don DeLillo’s novel White Noise—is a Los Angeles–based quintet whose music has been described as “an appealing mix of edgy power pop [with] soaring, anthemic qualities” (Patriot Ledger) and who have been likened to The Killers, The Strokes and U2.

Anna—who began studying classical violin at a young age and played jazz at Milton—attended Columbia University and then headed west to Los Angeles where she met Mikel Jollett, the band’s founder and singer/songwriter, through mutual friends. After a series of tragic events in Jollett’s life, and after a year of writing songs while struggling with that grief, he decided he had enough material for an album. Bringing together Steven Chen, bassist Noah Harmon, drummer Daren Taylor and Anna on viola and keyboard, The Airborne Toxic Event came to be.

The band’s self-titled debut album was produced by Majordomo, an independent West Coast record label, and was released in August 2008. The band developed an immediate and passionate fan base, as well as critical acclaim, right away.

Mikel Jollett has said of Anna, “She has this kind of energy that feeds off the audience, and yet she’s a very calming presence to us onstage. In some intangible way she draws people into our performance, just with the intensity she brings.”

Radio stations across the country are playing the band’s single “Sometime Around Midnight.” You can hear the song on local stations such as WBOS, WFNX and WBCN. Click here to see a live performance of this song on the Late Show with David Letterman. Click here to visit the band’s Web site.