Annual Symposium is a Showcase for Student Scientists 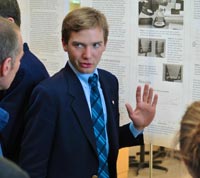 Faculty members invited Stephanie Gavell (I) and Neil Chandra (I) to be the Symposium’s keynote speakers. Stephanie and Neil framed the event by sharing their experiences of doing science at Milton.

Students work as individual investigators, in pairs, or in a team of three. The scientists developed posters describing their work, and talked with faculty, friends and parents about their process and outcomes. Within the four discipline areas, student projects were wide ranging. Examples include: