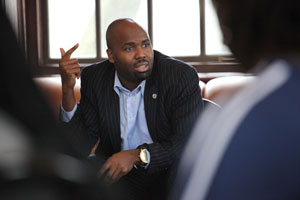 Armond James—a 2014 congressional candidate for Pennsylvania—shared with students the lessons he’s learned in his life and work. Mr. James’s visit was sponsored by the student club Onyx, in honor of Black History Month.

“I hear a lot about creating safe spaces,” said Mr. James, “but out in the real world, you have to have tough skin. Not everyone is going to like you, but don’t let that dissuade you. Stay true to what you believe in.”

Born and raised in the Mt. Airy section of Philadelphia, Mr. James grew up in what he describes as a hardworking, blue-collar household. He credits his parents for providing him a strong foundation, and teaching him about hard work, respect and the importance of education. Mr. James was the first in his family to attend college; he graduated from Temple University, where he discovered a passion for history and politics.

Mr. James, now a teacher in the Philadelphia public school system, talked to students about failure—particularly about losing to his Democrat opponent by a large margin in the congressional election. He also spoke about a life-changing trip to Iran in 2011, which “showed [him] how influential America is as a country, and how people perceive us.”

Mr. James, a Republican, plans to run for political office in the future, and he encouraged students to become involved in politics, especially at the local level.

“Be prepared when opportunities present themselves,” he said. “Be competitive in what you want to do, and spend time around people who push you into uncomfortable places, because you will learn from that.”