Art and Science, Teacher and Student, a Collaboration at the Museum of Science 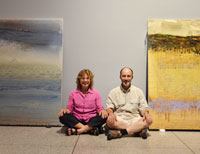 Artist Anne Neely’s large canvases, with rich hues of blues, greens and browns, hang in an exhibit hall in Boston’s Museum of Science. The paintings in Water Stories: Conversations in Paint and Sound reflect Anne’s interpretation of water issues plaguing the United States. This merging of art and science developed from a collaboration between teacher and former student.

Anne was new to the visual arts faculty in 1974, and David Rabkin ’79 was one of her students, whom Anne describes as “inquisitive and full of ideas.” They kept in touch on and off over the years. David earned his doctorate in technology and innovation management from MIT and is now director for current science and technology at the Museum of Science. Anne retired from Milton in 2012 and focused on her art, specifically the phenomena of water, a subject of her paintings since 2004.

“I am an ocean-loving person,” says Anne, who has studios in the South End and on the coast of Maine. “The shifts and subtle changes of water patterns have been influential to me,” she says. After reading Water by Marq De Villiers she began a “decade-long search to find ways to paint unseen aquifers, rivers, oceans and streams.” She began researching water-related issues, such as droughts and fracking, and began to incorporate what she was learning. She arranged a meeting with David Rabkin to explore her idea about a water exhibition at the museum. Coincidentally, David had been thinking about mounting a water exhibit, as well.

“At the Museum, mixing art with our more typical educational approaches works well,” says David. “The art opens people to ideas, emotion, and scale, in ways that more explicit techniques may not. Art broadens the audience, welcomes all kinds of learners, and adds dimensions of experience that are otherwise unavailable.”

Anne interviewed residents around the country about their experiences with drought, fracking and pollution. She gave her recorded interviews to sound artist Halsey Burgund, who created an audio composition that accompanies the paintings.

“I didn’t want the paintings to look like what you would see if you were looking at a photograph of an algae bloom or a drought,” Anne says. “I wanted to paint from imagination, emotion and interpretation. I want different things to bubble up when someone looks at the painting. Some will see beauty and foreboding; others will conjure up their own memories or experiences about water. I hope that each painting raises their awareness.”

“Working with David has been a memorable collaboration,” says Anne. “His visits to the studio to see the progress of the paintings and our conversations were a wonderful exchange of teaching and learning for both us. Bringing the public into a visceral experience was our goal for Water Stories. I’m so fortunate to have had this opportunity.”

Water Stories: Conversations in Paint and Sound will be on exhibit at Boston’s Museum of Science until January 2015. Water Stories (Edition One Books), a book about this exhibition, will be published in September 2014.