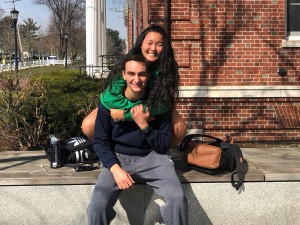 Photo by Alex Chen (I)

Last week, newly elected head monitors Asia Chung (II) and Michael George (II) took up the mantle as school leaders from outgoing head monitors Kailee Silver (I) and Greg Livingston (I). Asia, who is from Jamaica, lives in Robbins House. She is photographer for the yearbook, the Tavern and the filmmaking club. She also served on the Self-Governing Association (SGA) as a Class III rep. Mikey is a day student who lives in Milton. He also served on SGA as class rep his sophomore year.

Over the course of two weeks in April, ten students—self-nominated—each made their case to all students and to the faculty, that they should be one of the two head monitors for the 2018–2019 year.

Asia and Mikey are already planning for the 2018–2019 school year and are excited to get started. Their idea is to focus on small-scale achievable goals such as increasing community days, instituting a late system for assemblies and extending snack bar hours. They also want to continue Kailee’s and Greg’s focus on student mental health, taking a closer look at stress days.