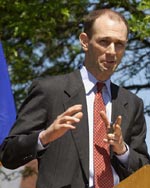 A key economic advisor to Barack Obama both before and during the presidential campaign, Austan Goolsbee ’87 was named by President-elect Barack Obama to become staff director and chief economist on his newly created Economic Recovery Advisory Board.  Austan will also assume a position on the Council of Economic Advisers.

The office of the president-elect announced that the Economic Recovery Advisory Board “will be charged with offering independent, nonpartisan information, analysis and advice to the President as he formulates and implements his plans for economic recovery. The Economic Recovery Advisory Board will provide regular briefings to the President, Vice President and their economic team. Paul Volcker, the chairman of the Federal Reserve from 1979–1987, will serve as chair of the board.

At the University of Chicago’s Graduate School of Business as the Robert P. Gwinn Professor of Economics, Austan Goolsbee is also a research professor with the American Bar Foundation.  Austan began his association with the President-elect as an economic adviser to Obama’s 2004 Senate campaign, and has been a senior economic adviser to the campaign throughout the 2008 presidential race and transition.

According to an announcement from the American Bar Foundation, “during the press conference announcing the appointment, the President-elect called Goolsbee  ‘one of America’s most promising economic minds, known for his path-breaking work on tax policy and industrial organization,’ and added that Goolsbee is ‘about as fresh a face (in Washington) as you can get.’”

Austan’s undergraduate career was at Yale; he earned his Ph.D. in economics from the Massachusetts Institute of Technology.  He has served on the Panel of Economic Advisers to the Congressional Budget Office, and as a special consultant for Internet policy for the U.S. Justice Department, Antitrust Division. He was named one of the 100 Global Leaders for Tomorrow at the Switzerland 2001 World Economics Forum.  He has recently been a columnist for Slate Magazine and The New York Times, and has often been the public voice of the Obama campaign and transition team on economic matters, particularly in recent weeks as the economic crisis has unfolded.

Austan Goolsbee’s research projects have focused on the impact of public policy on the economy, particularly tax policy and policies affecting the Internet and the information economy.  His work is driven by empirical data analysis, and his most recent American Bar Foundation project uses data from the U.S. Census about the characteristics of entrepreneurs and small business owners; the project examines how and to what extent tax policy may influence their decision-making.

Austan’s research interest on the impact of the Internet was highly influential in the Obama campaign. In a recent profile by theChicago Sun-Times, Austan summed up the essence of his ideas on technology in helping to form the economic platform: “The role of technology (in Obama’s policy platforms) comes out of the role of the Internet, allowing people to gather information about prices, about competitors and making industries more competitive to the benefit of consumers.”  He added, “That ethos underlies the idea that we can count on the spread of information to improve the function of government.”

In 2007, Austan requested a temporary leave from the Milton Academy Board of Trustees, to concentrate on the demands of his role at the center of the campaign.