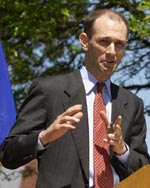 President Obama has appointed Austan Goolsbee, Class of 1987 and former Academy trustee, chairman of the Council of Economic Advisors. The council of Economic Advisers is a White House agency involved in the economic policy process on a daily basis. Formerly, Austan had been one of the three Council members, as well as the president’s chief economist.

As Austan describes it, the three members of the Council of Economic Advisors form a kind of “idea shop and analyzer” tied to policy development. It “provides analysis of the economy and of the potential economic impact of proposed policies,” according to the New York Times. For example, Austan explained in a the Milton Magazine, “as the auto industry crisis called for action at the start of the Obama administration, an interagency meeting deliberating about what the administrations role ought to be might look to the CEA for analysis about the state of manufacturing nationwide—what has worked, or not worked, in that sector.”

The New York Times reported that Austan is “the youngest chairman since Arthur M. Okun held the job from 1968 to 1969 under President Lyndon B. Johnson. (Mr. Okun is known for Okun’s Law, which describes the relationship between changes in employment and changes in output.)” As chairman, Austan succeeds Christina Romer, who returned to the University of California, Berkeley.

Austan has known Barack Obama since both were professors at the University of Chicago, Austan in the Graduate School and Mr. Obama in the Law School. Austan was a principle economic advisor to the Obama campaigns, for the Senate and the presidency.