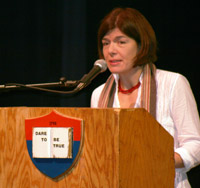 Author and alumna Claire Messud ’83 returned to campus on Wednesday, November 14, as part of Milton’s Bingham Visiting Writers Series. Claire’s first novel, When the World Was Steady, and her book of novellas, The Hunters, were finalists for the PEN/Faulkner Award; her second novel, The Last Life, was a Publishers Weekly “Best Book of the Year” and an “Editor’s Choice” at The Village Voice. All three books were New York Times“Notable Books of the Year.” Her most recent book,The Emperor’s Children, has received wide acclaim; in its review of the novel, the New York Times Book Review named Messud an author of “unnerving talent.” She has been awarded a Guggenheim Fellowship and a Radcliffe Fellowship, and she is the current recipient of the Strauss Living Award from the American Academy of Arts and Letters. Claire spoke in Ruth King Theatre during second period and the conversation continued with students and faculty in Straus Library.