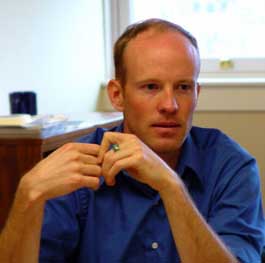 The New York Times heralds the debut book of Lewis Robinson ’89, Officer Friendly and Other Stories, as a volume that puts the writer and his work on the literary map.

“Lewis Robinson,” his reviewer writes, “is the rare fiction writer who has also been employed as a crab slaughterer. Whatever it takes to handle a job like that can also be found in his short stories.”

On Tuesday, April 22, 2003, Lewis returned to Milton Academy creative writing classrooms to read from “The Diver”—the first of 11 stories inOfficer Friendly—and to discuss his craft.

“In college, I worked as a diver in a small town in Maine. I remember the awkwardness of existing in that zone between outsiders and locals,” he told students. Lewis’s stories are all set in Point Allison, a fictional Maine town.

“I admire stories that put the narrator in a tight spot,” Lewis said. The rest of the story evolves from how that character acts in his predicament, he said. “I make sure that every detail contributes to the center [of the story], to the primary concerns of the narrator.”

Lewis also discussed the process of writing. “I see the work of writing as being almost entirely revision. I have very little faith in my first draft,” he said. “There’s the exhilaration that comes with the first draft …but I’m usually in a daze when I’m getting the story out.” Lewis encouraged students, however, to rely on the power of their sub-conscious minds in the first stage of creative writing, telling them that a more rational, structured approach at the outset can result in contrived, too-careful fiction.

On his method of character development, Lewis said, “These characters are not plucked from the ether.” They are, at some level, based on people he has known; main characters are often an exploration of some version of himself, he said, noting that the plots of his stories are fictional.
“The work that I most appreciate is character-driven. My style defers to scene, action and dialogue. I stay away from exposition, [and I think that] brings an immediacy to the story. My style is spare. I think writers often use adjectives and adverbs when they can’t find the right verb or noun.

“It’s important to choose details in a really discriminating way. That’s what I aspire to do,” he said.