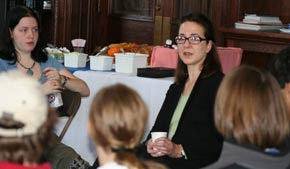 Lorrie Moore, author of the award-winning short story collection Birds of America, visited campus on November 1 as this year’s Bingham Visiting Writer. Ms. Moore read her story, “Dance in America”: a dancer visits a school and, on the same trip, an old friend with a seriously ill child. Ms. Moore then answered students’ questions and continued her conversation in Straus during 3rd and 4th periods. She is visiting classes throughout her two-day stay.

David Smith, English department chair, introduced Ms. Moore by imploring students to listen intently to her words. “A woman in one Moore story reflects on ‘the rich torment that was life,’” David began. “Rich torment. Some of you who have been reading Birds of America have been struck hard by the torment part, and it’s true that many of these characters are not happy people. There are no easy answers in this work, few sunsets for the characters to ride off into. But what I don’t want you to overlook…is the richness, whether of humor or of compassion or of nuanced insight.”

Ms. Moore explained that the parent/child bond—which is one subject broached in “Dance in America” and throughout her work—is something that she has “been interested in from the beginning.” She explained, “It’s such a basic plot line in our lives that it’s hard to write about people without at least a little of that.”

Regarding how she came up with the title for her collection, Ms. Moore noted that, “every single story has a bird or birds, or bird imagery in it somehow. Birds are often the poetic images of flight and vulnerability. ‘Bird’ is also a British slang term for women, and the word can be used to describe eccentric people. Since my stories contain all of that, it seemed to work.”

In addition to Birds of America, which was a National Book Critics Circle Award Finalist and winner of the Irish Times International Prize for Literature, Ms. Moore’s fiction, reviews and essays have appeared in such publications as The New Yorker, The Paris Review and Best American Short Stories. She won the Rea Award for achievement in the short story in 2004 and won the PEN/Malamud Award in 2005. She has received fellowships from the National Endowment for the Arts, the Guggenheim Foundation, the Lannan Foundation, and the Rockefeller Foundation, and is a member of the American Academy of Arts and Letters. Ms. Moore is a member of the creative writing faculty at the University of Wisconsin at Madison and is the University’s Delmore Schwartz Professor in the Humanities.