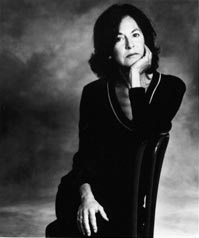 Award-winning author, Louise Glück, will be on campus this Wednesday, March 12, as part of the Bingham Visiting Writers Series. Louise is the author of numerous books of poetry, including The Seven Ages; Vita Nova, winner of The New Yorker magazine’s Book Award in Poetry; Meadowlands; The Wild Iris, which received the Pulitzer Prize and the Poetry Society of America’s William Carlos Williams Award;Ararat, for which she received the Rebekah Johnson Bobbitt National Prize for Poetry; and The Triumph of Achilles, which received the National Book Critics Circle Award.  She has also published a collection of essays, Proofs and Theories: Essays on Poetry, which won the PEN/Martha Albrand Award for Nonfiction.  Louise’s tenth book of poetry, Averno, was nominated for the National Book Award in 2006 and was listed by the New York Times Book Review as one of the 100 Notable Books of the Year.  Her honors also include the Bollingen Prize in Poetry, the Lannan Literary Award for Poetry, and fellowships from the Guggenheim and Rockefeller foundation, and from the National Endowment for the Arts.  In September 2003, Louise was appointed United States Poet Laureate by the Librarian of Congress.  She is currently a writer-in-residence at Yale University.  On Wednesday, Louise will speak in Ruth King Theatre during second period, followed by a discussion with students and faculty in Straus Library.