The award-winning Claremont Trio, that was formed by Milton graduates Emily and Julia Bruskin ’98, will be in residence on campus Monday January 12. Julia is the Claremont Trio cellist, Emily is the violinist, and pianist Donna Kwong completes the Trio. 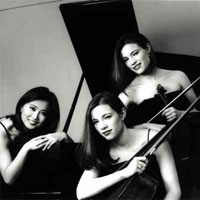 The trio was awarded the Kalichstein-Laredo-Robinson International Trio Award (KLRITA) by the Chamber Music Society of Detroit last month. The selection was at Carnegie Hall in New York on December 2, by a panel including musicians Richard Goode, Jaime Laredo, Robert McDonald, Sharon Robinson, and Joel Smirnoff and two presenters, Lois R. Beznos, Chamber Music Society of Detroit and Ara Guzelimian, Carnegie Hall. The Award is believed to be the first piano trio award in the world of classical music and the only such award to be administered by a presenting organization.

The participating trio award presenters, including Carnegie Hall, host separate concert series, and will include the Claremont trio in each of those respective series. In addition the trio will benefit from a loan by Machold Rare Violins; Julia and Emily will perform on these rare instruments as they tour the U.S. and around the globe. In addition, Arabesque Recordings, LLC will produce a CD recording of the ensemble and will make the recording available at the twenty presenter sites.

The trio, formed in 1999 at the Taos School of Music in New Mexico, won first prize in
the 2001 Young Concert Artists International Auditions and consequently performed
in New York, Boston, Washington D.C., Chicago, Buffalo, Switzerland, British Virgin Islands, Florida, Virginia, South Carolina, Nebraska, Minnesota, Texas, Utah and California, among other sites. In 2002, the Claremont Trio performed in Slovenia and Croatia, as part of a cultural exchange sponsored by the U.S. State Department and Carnegie Hall.

The trio will perform at 9:15AM, 10:15AM and 11:55AM in the Kellner Orchestra room. In addition to performing, the trio will share their experiences as professional musicians.

The trio will also perform, for the third time, at the Gardner Museum Sunday, January 11 at 1:30PM.