Battling Robots at a Bruins Game? 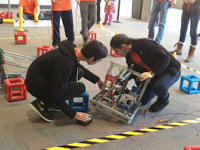 Milton’s Robotics Team demonstrated their robots in action at the Providence Bruins hockey game on Presidents’ Day. The team was invited to attend the game and then used a dedicated space in the lobby between periods to show hockey fans what their robots can do.

The team uses and competes with the VEX Robotics system. They designed this demonstration as a competition between two of their robots, to determine which would score the most points on a designed course. Carson Prindle (IV) and Truman Marshall (IV) were the robot drivers and the robots’s goal was to stack cubes on a pole or get the cubes past a line to score points.  To change it up a bit, the team allowed the robots to “steal” cubes to take away points.

According to team co-heads and founders Juliana Rogoff (II ) and Ravi Rahman (II), the crowd was really engaged as the robots battled it out. Juliana and Mark Massa (II) (also a co-head and founder) yelled out the updated score and kept the crowd informed of the robots’ progress.

Juliana says the team spent hours preparing–designing the game, practicing late at night and tweaking the robots.  “The person who coordinated our appearance at the arena told me our demonstration was really fantastic because the robots were really engaged, fighting it out and that made the whole event exciting.”

The team was accompanied to the hockey game with their faculty advisors Carol Artacho (science) and Chris Hales (math and computer programming), as well as Principal David Ball and Head of School Todd Bland. The team, in its second year as an official school club, will now focus on the regional VEX competition coming up next month in Worcester, Massachusetts.