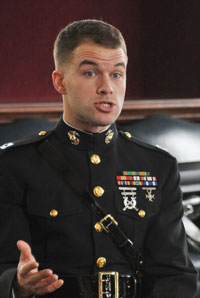 The Marine Corps relies on acronyms, according to Brendan Caine ’03, who served as an intelligence officer in the U.S. Marine Corps with deployments to Iraq in 2009 and Afghanistan in 2011. When he spoke to students as the 2013 Veterans’ Day speaker, Brendan asserted that several of those acronyms relate powerfully to Milton students’ lives at School, students’ opportunities here, and choices ahead.

PFC. GPS. OCS. These acronyms live in Brendan’s memory as sources of transformational challenges during his military service. The skills, commitment and growth that they demand affect lives well after military service is over. The core lessons of each distinct challenge apply to all of us, and have an effect on all aspects of our individual futures.

Private First Class (PFC), Brendan explained is the military rank of a junior enlisted person assigned to his or her first operational unit. During training, in a pressurized situation, every PFC must learn and demonstrate a wide spectrum of new skills and requirements, from living far away from home, for example, to managing guns, uniforms, relationships with peers and superiors, many failures, and preparations essential for deployment.

PFCs deal with so much outside of their experiences at that point in their lives, Brendan says, that they operate well outside of their comfort zone. The chance to seize those opportunities, go beyond what is comfortable, and build upon what happens, Brendan told students, is exactly what Milton provides in a safe environment. “If you are an athlete, try out for Improv Club,” he urged students. “If you’re an accomplished musician, try pushing yourself in science. The tragedy is not failing. You will not regret failing. You will only regret not trying.”

During land navigation training—alone, at night, in the rain, needing to identify a physical object—as Brendan described, the GPS made the critical difference to a soldier’s success. In the military, a GPS is considered a “force multiplier,” an agent, in this case, a technology, that helps to achieve the optimal result as effectively as possible.

“An excellent Marine might be described as a force multiplier,” says Brendan. “That person is someone who makes both themselves and the people around them better. That is what leadership is. Your teachers work to make you a force multiplier—whether as a student, an athlete, an artist or a citizen. Use your strengths to help make others stronger.”

Finally, Brendan described Officer Candidate School (OCS), which officer candidates experience during the summer between college years. The mission of OCS is to train, screen and evaluate prospective officers; individuals in the rigorous program may opt out at any time.

“The fact that we can leave the program voluntarily forces us to ask—as we are crawling through a mud-filled trench at one a.m.—‘Why am I doing this?’” Brendan urged students to ask this question of themselves, about everything they do, every day. Learning to be introspective and self-aware are essential skills, according to Brendan, in the military and in life. Making choices consciously, Brendan told students, demands that we figure out who we are, what we value, and why.

Brendan attended University of Southern California where he earned degrees in biology, psychology and neuroscience before accepting his commission as an officer in the Marine Corps. Since fulfilling his active duty commitment to the Marines, Brendan has completed his first two years at the University of Chicago Booth School of Business where he is pursuing concentrations in econometrics and entrepreneurship.