Be “The Light,” Gospel Choir Urges in New Original Song 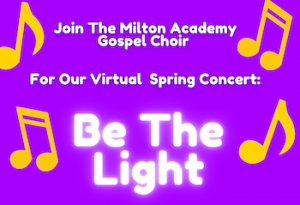 Working over Zoom, the student choir developed a song called “The Light,” which delivers an inspirational and urgent message calling for hope in difficult times.

“Since we’re all dealing with this new setting of the pandemic, I thought, let’s do something original, something that shows our character,” said Washington. “Let’s write a song and see where it goes, no pressure. Once we got into the writing process with everyone in the virtual classroom, we thought of the message we wanted to send, which was uplifting and positive in the face of everything going on in the world.”

Once some students overcame a little initial shyness about songwriting for the first time, the process caught fire, Washington said. “There was a lot of energy, everyone was bouncing ideas off each other.” While they worked out the type of song they wanted to write, Katheryn Prather ’22 began strumming chords on her guitar that would eventually become the basis for the mid-tempo song. Students dropped lyrical ideas into the Zoom chat, and Washington put it all together and recorded a demo track.

“The Light” will premiere at the Gospel Choir’s Wednesday, May 19 concert. Washington, Dow, and the students wrote hopeful lyrics inspired in part by poet Amanda Gorman’s “The Hill We Climb,” which she performed for President Joseph Biden’s inauguration in January. Gorman’s poem concludes, “For there is always light, if only we’re brave enough to see it. If only we’re brave enough to be it.”

“Her message about light was so hopeful and inspiring,” Dow said. “It took us just one rehearsal to conceptualize the song. It was organic, and what I loved about it was that even though there was some hesitancy at first, once it started to come together, everyone was giving their ideas and trying different things, so it worked out very well.”

Those who have heard it have given the song a very positive reception, Dow said. Music plays an important role in communities, and gospel music in particular has had a long history of connecting performers and audiences. “The Light” was written to provide hope during a challenging time.

“Music can help us express deeper emotions than we’re able to say with just words sometimes,” Washington said. “It can be a comfort, or a place of hope. With this song, we said, ‘Let’s focus on where we want to be.’ There has been so much negativity expressed over the state of the world—let’s do something that feels optimistic about the future.”

Musicians everywhere, faced with the cancelation of live shows due to the COVID-19 pandemic, have stepped up to share their gifts in other ways, including virtual concerts delivered from living rooms and backyards, Dow said. Gospel Choir members felt it was important to find a way to share music with one another and the School community during this challenging time.

The Gospel Choir’s May 19 concert will begin at 7 p.m. ET and will feature recordings of songs and readings of scripture. Parent and singer Raynya Simmons P ’21, ’24, ’26, the Milton Chamber Orchestra, and others will also make appearances.