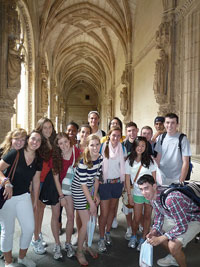 If you hear more Spanish being spoken in the halls this month, it’s because Milton is hosting 16 students from Colegio el Pilar as part of the annual eight-week Spanish Exchange program. The first four weeks of the program took place in June, when Milton students traveled with faculty member Tracy Crews to Spain. Paired with Spanish counterparts, Milton students stayed in local homes and attended classes at El Pilar, a private school in Madrid. Now the roles are reversed, and Milton families are hosting the Madrileños into October.

Osaremen Okolo (II) is paired with Patricia Garrido, who describes her first visit to the United States as “fantastic.” Osaremen, who stayed with Patricia’s family in Madrid, hopes to return to Spain next summer.

While here, the Spanish students shadow their Milton friends, attending classes in art, dance, English and history. They take field trips to Plymouth Plantation, Boston’s Freedom Trail and Harvard Square. Patricia’s favorite moments of her trip so far have been the whale watch excursion and the weekend trip to New York City that Osaremen’s family arranged.

“Now that the Spanish students are here, I can definitely ‘hear’ Spanish much better,” says Osaremen. “My Spanish is not as strong as it was in Madrid, because I didn’t use it as often over the summer. But then I’m surprised when I’m speaking to Patricia and the other students in Spanish instead of English without even thinking about it!”

“Our students come back from the Exchange trip as different people,” Ms. Crews says, “having established lifelong friendships, having had experiences that open their eyes and challenge them. Their language skills get a boost, but the experience is transformative in a larger way.” Milton’s Spanish Exchange Program began in 1979, and Tracy Crews had led the program since 2005.