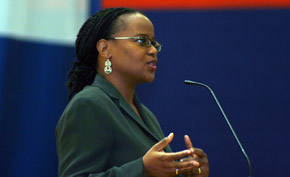 Edwidge Danticat, award-winning author of several collections of stories and novels, visited campus on February 28 as the 2007 Bingham Visiting Artist. Ms. Danticat read two short stories from her collection entitled Krik? Krak! and answered students’ questions in the Athletic and Convocation Center. The story “New York Day Women,” she explained, came from her observations of women like her own mother, whose day work was caring for other people’s children. Woven within the story were themes based in the Haitian proverb “Shame is heavier than 100 bags of salt.” Ms. Danticat’s writing often reflects her experiences as a Haitian immigrant growing up in Brooklyn, New York.

The second selection Ms. Danticat shared was the epilogue from Krik? Krak! entitled “Women Like Us,” which talks about her decision to become a writer in spite of her family’s discouraging her from that work. As she explained to students, “In Haiti, where my family and I were living during the dictatorship, many writers were sent to jail for their writing and their points of view. My family’s idea of being a writer had a very dangerous connotation associated with it.”

Ms. Danticat says that her first real exposure to writing was in hearing stories told—through oral tradition. The title Krik? Krak! comes from the phrase that would begin any story-telling in her native country: the speaker would ask “Krik?” to which the audience would respond “Krak!” and that, as she explains, “was how you knew the story was beginning.”

Having attended Barnard College in New York, Ms. Danticat’s formal writing training began with her enrolling “hesitantly” in a few creative writing classes where she worked with fiction and personal narrative. While visiting Milton, Ms. Danticat worked with students in several creative writing classes and held discussions with students in Straus Library. Her next book, Brother, I’m Dying, will be published this fall.