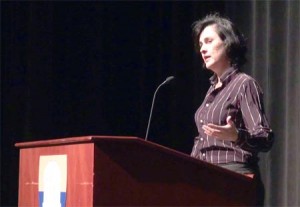 “The most difficult part is always the beginning,” novelist Kamila Shamsie told Milton students. “You have to create a whole world out of nothing.”

Ms. Shamsie, this semester’s Bingham Visiting Reader, read passages from her 2017 novel, Home Fire, and spoke with students about her process when she writes fiction. Once the world of a novel is established, making connections between the characters that advance the plot becomes a “fun technical challenge,” she explained.

Home Fire reimagines Sophocles’ Antigone as a modern drama. Many sections of Milton English classes have read the novel as well as the ancient play. The Pasha siblings—older sister Isma, twins Aneeka and Parvaiz—grapple with their loyalties to one another, to their Muslim faith, and with their identities as British citizens. Home Fire takes place in London, Massachusetts, Raqqa and Karachi, as Parvaiz’s recruitment by an Islamic State terrorist to fight in Syria derails his sisters’ lives. Isma hopes to move past Parvaiz’s betrayal, while Aneeka will do everything in her power to bring him back home.

Though Home Fire is a contemporary story, the only aspect Ms. Shamsie pulled from her own life is a studio apartment that Isma rents, which mirrors Ms. Shamsie’s home when she was a graduate student attending the University of Massachusetts-Amherst.

“Much of the joy of fiction is that dimension of reaching out, of imagining, and creating other types of experiences,” she said. “It’s an interesting question, ‘What is the imagination?’ Different writers have different answers to this. There are some who say everything comes from within you. But the imagination is from that bit within you that is capable of reaching out beyond yourself. It is the greatest thing we have as human beings.”

The idea for the novel sprung from a theater director’s request that Ms. Shamsie write a play for the company. When she responded that she is not a playwright, the director suggested adapting Antigone, as its conflicts between religious and man-made laws, and the bonds and divisions in families, are relevant today.

“In my memory, although I know memory is faulty, almost as soon as I reread the plot of Antigone, I knew the story I would write,” said Ms. Shamsie, who at the time was seeing news stories about young Muslim men from Britain being recruited by extremists. “There was a very contemporary story here. My process was to first decide that anything in the play that didn’t work, I would discard, that my fidelity was not to a 2,000-year-old play, but to the novel I was writing…. Once I started writing, I set the play aside, thinking it would go away. The surprise was actually the extent to which it didn’t.”

Ms. Shamsie is the author of seven novels, which have been translated into more than 20 languages. Home Fire was longlisted for the 2017 Man Booker Prize and won the 2018 Women’s Prize. A God in Every Stone was shortlisted for the Baileys Prize, the Walter Scott Prize for Historical Fiction and the DSC Prize for South Asian Literature. Three of her novels have received awards from Pakistan’s Academy of Letters. Kamila Shamsie is a Fellow of the Royal Society of Literature and, in 2013, was named a “Granta Best of Young British Novelist.” She grew up in Karachi, Pakistan, and now lives in London.