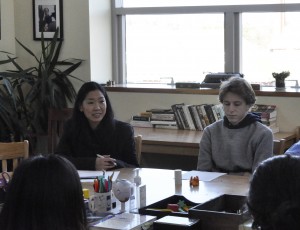 Sharing visceral works filled with loss, longing, fear and love, Bingham Visiting Writer Tina Chang read her poetry to students and explained how she uses writing to grapple with existential questions about society and motherhood.

The award-winning poet and teacher read a poem from Hybrida, her forthcoming book, that weaves the voice of her son from the womb with news reports about the shooting of Michael Brown in Ferguson, Missouri, and with observations about the idea of police protection being conflated with hunting prey.

“Are justice and victory the same laurels?” the poem asks. “For all that we say about death and its peace and its privacy, it’s better to live.”

Ms. Chang has published three poetry collections: Half-Lit Houses (2004), Of Gods & Strangers (2011) and Hybrida, which will be released in May 2019. She writes with the goal of breaking down “the wall between people and poetry,” she told the New York Times after being named the first female poet laureate of Brooklyn. “Somewhere along the way, we have felt intimidated by it, or we have felt we have to be well-educated in order to be able to access it or walk into that world.”

Hybrida is an exploration of parenting a mixed-race child in 2018—Ms. Chang, who is Asian-American, has two children with her Haitian-American husband.

“There are more mixed-race children in the world now than ever before, and this book feels special to me, because I’m trying to speak to that experience,” she said. “It was a really difficult book to write. One of the greatest things you can do is try to approach something you’re scared of.”

Ms. Chang explained that although she has written in reaction to news shared online, she quit social media about a year ago. “It’s amazing to not think about anything else but what’s happening in real time.” She then shared a viral video showing a young, black boy slowly approaching police with his hands over his head after his mother is detained in a traffic stop.

“When I see something like this, it affects me in a lot of ways as a poet, as a parent,” Ms. Chang explained. “After a video like this goes viral, we start discussing it online. We have conversations and debates. I didn’t really know how to converse, because there were so many things happening under the surface for me about how black boys are treated in this country, and associations with the young, black boy that I’m raising. I don’t know how to have those immediate, online discussions. The way that I process the world is through poetry.”

Half-Lit Houses is a reflection on the death of Ms. Chang’s father from cancer when she was just 2 years old. She traveled to Taiwan to connect with him. “How do you find someone who’s gone? It’s a good question to ask,” she told students. Of Gods & Strangers centers the themes of sex and love.

Ms. Chang has received awards from the Academy of American Poets, Barbara Deming Memorial Fund, Ludwig Vogelstein Foundation, New York Foundation for the Arts, and the Van Lier Foundation. She has also been granted residencies at the MacDowell Colony, Djerassi Resident Artists Program, Vermont Studio Center, and Virginia Center for the Creative Arts. Ms. Chang teaches at Sarah Lawrence and is a member of the international writing faculty at the City University of Hong Kong.