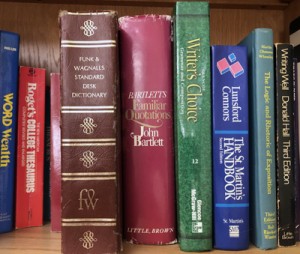 It’s National Punctuation Day, and this sentence is missing its marks:

The sentence is part of a past sophomore English test, challenging Milton students to insert the correct symbols that create the appropriate pauses and attribution in a long paragraph, without under- or over-punctuating. It’s deceptively simple, but those with a heavy hand may be surprised to learn that the sentence is missing just one comma and two em dashes: “I learned—heed this warning, future employees—how bosses who are desperate to fill positions convince staff who have expressed no interest in those positions to do the job anyway.”

Learning about punctuation may not be as thrilling to an English student as discovering a work of literature; it may pale in comparison with the gratification that comes with finalizing a piece of writing. But Milton English teachers, in a program that has long boasted strong writers, spend time on the fundamentals of grammar and style, including punctuation and the teaching of megablunders—eight critical writing mistakes to avoid. These are the technical aspects of writing and reading that help convey meaning and scaffold creativity.

“When we speak to one another, we depend on pauses and changes of tone to understand the logic and, just as importantly, the emotion of each other’s words,” English faculty member Eric Idsvoog says. “In our writing, we depend on punctuation marks to capture those crucial, human features of thought and voice. A sentence without the right punctuation is like a head without a face. Also, as every student learns, the path from misplaced commas to cannibalism is short and not sweet. Imagine the sentence ‘let’s eat, my friend!’ without the comma.”

Aside from its tonal implications, improper or unclear punctuation can have drastic effects: Last year, a missing Oxford comma cost a dairy company millions of dollars in a dispute with its drivers.

A firm grasp on the mechanics of the language enhances the work that emerges from the School’s advanced courses, says English department chair Caroline Sabin. A period between two sentences, for example, can distinguish two linked thoughts; a comma followed by a conjunction, such as “and” or “although,” explains the link explicitly.

“If you join the sentences with a semicolon instead of a comma and one of those coordinating or subordinating conjunctions, you’re now saying to the reader, ‘There is a logical link between these two sentences, but I’m not going to tell you what it is. You have to figure it out, and I have chosen not to tell you. There is a reason why I want you to do the work,’” Caroline says. “What power you have, what control. You make sure that your reader gets exactly what you wanted them to get out of a piece by making a punctuation choice. Our students should have that kind of power and control over their language.”

Milton’s faculty grammarians have strong opinions on punctuation and enjoy exploring its nuances. Eric, for example has a penchant for dashes—“they are versatile, visually clear, and expressive. They are also easy to overuse.” The rules about spacing around ellipses can trip him up, and he harbors a preference for the American convention of including periods and commas inside quotation marks, as opposed to the British style, which places them out. “If you write ‘hello’, you might as well be singing ‘God Save the Queen,’” he jokes.

Whether colons or semicolons belong inside or outside of the quotation marks is a tricky question for writers, faculty member Katherine Hamblet says. (They go outside). The “graceful and decisive” colon, when used correctly, can make a strong impact, Katherine says.

“If you listen to someone read aloud without regard to the punctuation, you will have trouble understanding a passage, but a reader who uses punctuation to communicate meaning is easy to understand,” says Katherine.

As for the Oxford comma, otherwise known as the serial comma, the English department is in full support.

Eric has just one question: “Can we call it the Milton comma?”