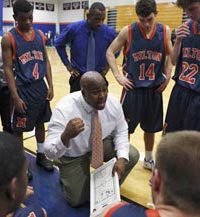 Milton fans burst into exuberant celebration as the boys’ varsity basketball team earned the Independent School League Championship title in a 54-53 win over Nobles and Greenough in the ACC this weekend. At the final buzzer, students rushed the court as players celebrated their victory, the first league championship in the team’s history.

Both teams had strong records going into the game on Friday night, and Nobles led in scoring for most of the game. In the final 15 seconds, Milton had possession of the ball and was down by one point when Coach Lamar Reddicks called a time-out.

“This team has been one of the grittier teams I’ve ever coached,” says Coach Reddicks. “They know how to bounce back. It’s not easy to do, but they have the confidence to come from behind.”

As the final seconds ticked down, Nick Bland (I) passed to Max Motroni (I), who brought the ball down the court, passing back to Nick. Spying Alec Brennan (II) near the net, Nick passed to him. Alec took the shot and missed, but then tipped in his rebound in the final four seconds for those crucial two points. Nobles made a serious attempt at one more shot, but the game ended in a Milton victory.

In the crowd were two Army National Reserve members who worked with the team earlier in the season. Before the game, Sergeant McKay and Sergeant Petrie spoke with the boys in the locker room. They had run the team’s first day of practice back in November, leading them through Army training exercises and speaking to them about brotherhood.

“Sergeant McKay was phenomenal with them,” says Coach Reddicks. “He had their attention like I’ve never seen before. They learned about what it means to have each other’s back and really support one another.”

Nick Pagliuca (I), Ryan Rizzo (I) and Ike Ngwudo (I) all made stellar plays and shots during the game, as well. Next up for the team is the NEPSAC Tournament, which begins for the Mustangs this Wednesday in a home game against Tabor Academy. Before the boys’ game on Friday, the girls’ varsity basketball team had a tough loss to Nobles (45-56), but they finished a strong season and are also moving on to the NEPSAC Tournament with a Wednesday game against Worcester Academy.