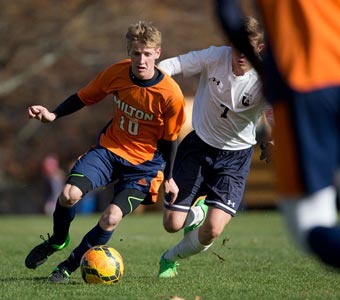 The boys’ varsity soccer team has had a perfect season. They are undefeated and earned the Independent School League Championship title. Their accomplishments are historic: They are the second team in ISL history to finish with a 15-0 record. Most important to Coach Chris Kane, however, is that this week the league bestowed on his team the ISL sportsmanship award. The New England championship playoffs are this week. The Mustangs are ranked number two in the nation for prep high schools. They beat Belmont Hill 4-0 in a quarterfinals round yesterday and move on to the semifinals this weekend.

The best way to understand why this team is so good is to go down to the field and watch. Their play is fluid and focused, the ball passing quickly between Milton’s players, rarely leaving their possession. As fast as their game appears, they are actually taking their time and keeping it simple, wearing their opponents out. Players on the field talk to each other, constantly, and teammates on the deep, talented bench encourage and support. A goal is cause for quick celebration, but then it’s back to focus, attention and steady play.

“The players know that consistency and focus are key elements to success, and they know not to take anything for granted,” says Coach Kane. “This year, the team’s talent, attention and investment have been phenomenal. It’s easy to lose focus over a long, 19-game season, through a 90-minute game, through six days together every week. They’ve done an incredible job of keeping that focus high, that intensity high, and that competitiveness high. They also bring that focus and attention to other areas, on and off campus.”

Five seniors are four-year varsity team members. These include team captains Adam Bramson (I), Shay Quintin (I) and Luis Viceira (I). They say this year’s team is the result of four years of hard work, discipline and maturity, under the strong leadership of Coach Kane. 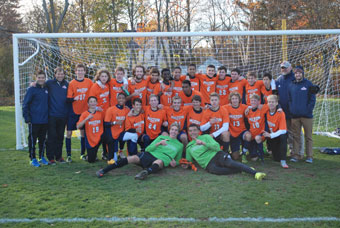 “Our biggest challenge this year was not repeating last year, when we went into some games underprepared,” says Adam. “We lost title games against teams we should have beaten. This year, we knew how good we were and it was about not letting up in games. We had no slip-ups.”

“We have so many seniors that play a big role on the team,” says Luis. “They push each other and the younger players to play their best. And with a continuing core of players each year, it’s all resulted in great team chemistry.”

The captains name a win against the defending Class A Champions, Berkshire, this season as a turning point. Last year, Milton lost to the team 4–0. This season’s 3–1 win was an invigorating boost that reinforced what they were capable of. “We felt on top of the world,” says Adam.

In many games this season, Milton was dominant from the first few seconds until the final whistle. Coach Kane made sure to take advantage of all the team’s talent.

“Out of respect for our opponents, we take our starters out if we have a big lead,” he says. “We get the younger, less experienced guys out there when situations allow, and it’s great for their development. We had 15 straight shutouts to end the year with our bench playing significant minutes, in many, if not all of those games. I’m most proud of the fact that the season was truly a team effort. Every single player on the team contributed to those results.”