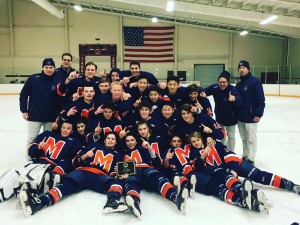 Over the first weekend of 2020, boys’ varsity hockey took to the ice against strong opponents in Tabor Academy’s New Year’s Tournament. On the first day, they beat St. George’s 4–2 and then Winchendon 6–3, setting them up for the championship game against Pomfret.

In an exciting game, senior forward Tyler Crist shot Milton’s two goals against Pomfret—one shorthanded to start the scoring and one on the power play to make it 2–0. Pomfret scored with 1:20 to go in the third period but Milton held on for the win (2–1). Milton also saw some stellar goaltending by junior Chris Demers, who turned back 26 of 27 shots that he faced.

Milton is now 6–5–1 for the season. This is their second Tabor Tournament Championship in the last three years.