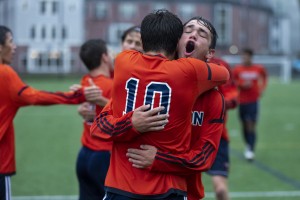 Boys’ varsity soccer had an exciting and standout season. The team was undefeated in the ISLs (12-0-3) clinching the ISL championship title in the game against Noble and Greenough, another undefeated ISL team that came into the match with a one-point advantage in the standings.

“Winning that game was the most incredible experience of my time here,” says David Walley ’20. “In those last five minutes of the game, we were tied and I felt it was going to be like other years, with us coming in second, every time.” But in the last minute of the game, Aidan Farwell ’21 scored the winning goal and the home crowd was exuberant.

The beginning of the season (overall record 13-2-3) started off a bit sluggish for the team.

We had high expectations at the beginning of the year,” says Noah Jackson ’20. “We thought winning would just come to us. But a couple of early losses opened our eyes. We had a team meeting about expectations versus reality. We changed our approach to focusing one game at a time and then went on to be undefeated in the next 15 games or so.”

Head Coach Chris Kane said boys’ varsity soccer has consistently been a strong program over the years, “but this group very much had to prove something for themselves on their own terms.”

“They significantly improved from the start of the season to the end of the season,” says Coach Kane. “They knew they were talented, but thought early on that talent would be enough. So we worked on how talent is not the primary ingredient. We worked on how to embody values and qualities we thought we needed to develop. We talked about complete and consistent efforts. And being focused and consistent on whatever we were doing whether it was a weight room workout, a two-hour field training or a game. They used their hunger to do the work to improve.”

The team was seeded fifth for postseason play in the NEPSAC Boys’ Soccer Championship Class A and traveled to Connecticut for the first round where they beat the Taft School 3-1. In the semifinals, they traveled to Northfield Mount Hermon where they won 2-0. The final game was back in Connecticut against Worcester Academy. The game was tied 1-1 after regulation play so the winner was based on penalty kicks, with Worcester Academy coming out on top.

“We played the toughest games we could possibly play, all on the road, and just met the challenge of each of those moments,” says Coach Kane. “At each step, they played better and with more belief. To be close and not to win is tough, but it wasn’t like they felt like they did not rise to the moment, they stepped up and played incredibly well. They did it with class. They did it with toughness. They responded with a lot of resilience, and togetherness and support from one another, which was great.”