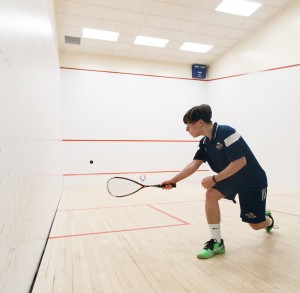 The boys’ varsity squash team opened their season with a big win (7–0) against Phillips Exeter, setting the stage for a strong undefeated (6–0) winter season so far. “It was so exciting to start off with a bang with such a resounding victory,” says co-captain Andrew Willwerth ’20.

The top eight players on Milton are four seniors and four juniors, which brings some solid depth and leadership to the team.

“A lot of students have stepped up as leaders this year, more than ever in my four years on the team,” says co-captain Zac Ibrahim ‘20. “I don’t mean just the captains, but all the kids. There is an interest and passion from everyone to get better.“

Zac enjoys the close matches, such as when they competed against Phillips Andover and won 5–2. “It’s more exciting when you know it could go either way,” he says.

The toughest match will be Belmont Hill, a team that has long dominated the ISL, but Zac and Andrew believe that Milton is playing at that high level. Last year, Milton lost to Belmont Hill to come in second in the ISLs.

“I think we can do it,” says Zac. “Everyone will have to be on their A game. It will come down to how prepared we are.”