Breaking the Cycle: Rais Bhuiyan Shares His Message of Forgiveness 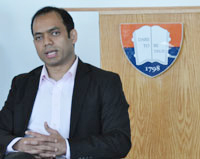 This spring’s Community Relations speaker, Rais Bhuiyan urged students to stand up against hate and violence, and to accept all people despite their backgrounds or differences. Mr. Bhuiyan is the founder of World Without Hate, a nonprofit organization based in Dallas.

“We need more peace and forgiveness in this world,” Mr. Bhuiyan said to students on Wednesday. “Hate and revenge are not solutions; they just bring more pain.”

Weeks after the September 11 attacks, Mr. Bhuiyan—a Muslim Bangladeshi living in Texas—was shot by Mark Stroman, a white supremacist on an anti-Islamic rampage. Stroman injured Mr. Bhuiyan and killed two other men in separate incidents. After a period of physical and emotional healing, Mr. Bhuiyan began a campaign to commute Mr. Stroman’s death sentence to a life sentence, drawing upon the values and beliefs of his Islam religion and the teachings of his parents.

“This single incident changed my entire life and helped me to realize that hate only brings fear, misery, resentment and disaster into human lives,” Mr. Bhuiyan says. “Hate creates obstacles to healthy human growth, which, in turn, diminishes society as a whole. To live in a better and more peaceful word, we need to break the cycle of hate and violence. I believe forgiveness is the best policy.”

Mr. Stroman was eventually executed, but he expressed remorse to Mr. Bhuiyan and embraced his anti-hate message.

After his talk, Mr. Bhuiyan continued the discussion with students during a question and answer session in Wigglesworth Hall and by joining a history class.