Bringing Avenue Q to Life, and to Milton 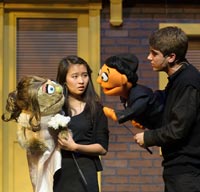 Performing in a musical is a challenge: you have to be able to sing, act and dance—often all at the same time. Now add to this the skill of puppeteering? That was a new challenge Milton’s actors had taken on for the fall musical, Avenue Q: School Edition.

Students appeared on stage with their puppets, alongside human characters, in the hilarious coming-of-age story. This type of production was a first at Milton. To help bring the puppets to life, Milton invited Kevin Noonschester—puppetry instructor and part of the Las Vegas company of Avenue Q—to instruct students in appropriate hand, head and mouth movements.

During “puppet boot camp,” Kevin drilled students on the basics of bringing puppets to life—making their characters breathe like real singers, observing the punctuations and rests; having the puppets’ eyes always facing the audience; and creating movements that appear realistic and effortless.

View photos from the production.