Bringing the Olympics to Boston? Math Students Figure Out How. 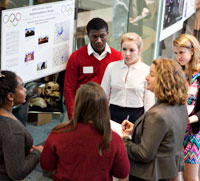 What does it take to host the Olympics? Over 100 Class II math students applied their skills to real world planning experience, developing mock bids for the 2024 Summer Olympic Games. Students in Precalculus, Statistics, and Engineering the Future courses presented proposals to faculty, students and parents at the Boston 2024 Project Symposium in the Pritzker Science Center this week.

Math faculty members Becky McCormick and Anne Kaufman wanted to develop a second semester project in which their students could focus on critical thinking and problem solving, while practicing math skills that might be applicable in future careers. The development office connected them with trustee Kimberly Steimle Vaughan ’92, chief marketing officer at Suffolk Construction, whose company is involved in the effort to bring the Olympics to Boston. The project began with a kick-off meeting in April, in which Kim and her colleagues spoke with students about what a project like this entails.

“For some students, the role math played in their various assignments wasn’t immediately obvious,” says Becky, “but as they continued to dig into their research, the math began to reveal itself, the level of analysis increased, and a lot of the students’ mindsets changed.”

The results were thorough, and interesting. The Olympic Village committee proposed that rather than build new facilities, Harvard University’s campus—with its 13 dining halls and 26 dorms—could serve as an ideal location for housing 10,500 Olympic athletes. The equestrian committee recommended Franklin Park as a location for equestrian events. Alison Bodner (II) and Sophie Lenihan (II) offered detailed recommendations for the horses’ veterinary needs, where the specific tracks and courses would exist, and who should design the courses.

One committee was charged with offering an opposing view—of why the Olympics should not be held in Boston. In addition to tallying financial costs, the students took a video camera to the streets of Boston to ask people what they thought. The results showed tourists in favor of the Olympics in Boston, with locals overwhelmingly concerned about one issue: traffic.

Nick DiGiovanni (II) of the sailing committee used GPS coordinates to map various locations in Boston’s inner and outer harbor for various sailing races. He recommended Castle Island as the location for storing the boats and suggested various areas from which fans could view the races. He spoke with local sailing clubs and calculated the complete cost of the sailing events.

“This project was a lot of work, but I learned so much,” says Nick. “I had fun doing it. I had to think about every detail, including safety and security. Where does a sailor go if he or she gets hurt? Where should the fans be, and what rules do they have to follow?”

Caitlin Cheng (II), of the energy committee, says, “The experience of doing this kind of research is rewarding. We also learned that you don’t always get the results you want, and that sometimes there are no easy answers.”