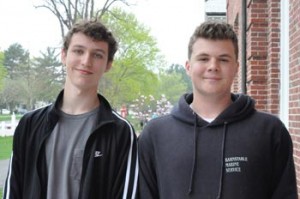 When Benjamin Botvinick ’21 and Zack Ankner ’20 traveled to Montreal for McGill University’s McHacks hackathon last year, they knew their competition was strong.

“We went in knowing we wanted to come up with something good and be really competitive, but we were going up against students from MIT, Harvard, and these other great universities,” Zack says.

To their surprise, their project SurfChat, a Google extension that allows people to chat with other visitors using the same website in real time, earned them an Amazon award and the boys offers to intern at the commerce giant. They couldn’t accept the offer, though—they’re too young.

“It was funny, because before the judging even happened, we were approached about internships and had to explain that we’re still in high school,” Ben says. “So, a few more years.”

The goal of SurfChat is to bring the spontaneous nature of in-person communication to the digital world, Ben and Zack explained. Users of the extension will be able to talk with other SurfChat users any time they’re on the same website—striking up a conversation the same way you might if you were standing in a line at a store or reacting to a movie together with another person. Watching a movie online is a far different, more isolating, experience than going to a movie theater, Zack explains.

“[With SurfChat] you have your own account, and you can see posts that you made, but you don’t have specific followers. It’s not like seeing only the posts from people you’re friends with,” says Zack. “It’s completely randomized, to your benefit.”

“That’s what makes it unique,” Ben adds. “You don’t post to people who are reviewing your profile. It’s more about having conversations in the digital world in the same way you would talk to someone in the physical world. The reason in-person conversation happens is that we have people all around us. Seven billion of them. And yet when we’re browsing the web, it can be a pretty solitary experience.”

At the end of the 2018–2019 academic year, the boys won a contest at Milton called E-Venture Challenge, where students pitched entrepreneur projects and competed for seed money—raised by students—to develop their ideas. They planned to focus on marketing the extension to attract more users, and are applying for a provisional patent. SurfChat is available for free on the Chrome Web Store.

Zack and Ben have also developed an extension for iMessage (Apple’s messaging app) geared toward people on the autism spectrum, called Intentions. The boys developed a program in which people would choose the emotion they wanted to convey with a message, and a text completion function would help them compose the message.

“For people who struggle with communication in person, it’s even harder in digital communication because there are no signals to pick up on,” Zack explains. “I think it could be used by anyone, really, who wants to have more emotionally intelligent writing. So, say you want the text to be happy. It won’t just choose a logical word, but one that is happier or shows enthusiasm.”

Ben believes it’s important to improve the depth of communicating on the internet. To keep the chats authentic and trustworthy, users are required to display their real names.

“I’m extremely interested in how people communicate, because one of the biggest problems that we have with technology is that with more technology, there’s less communication,” he said. “We spend more and more time alone by a screen, so how can we make those genuine connections? Because as much as Instagram connects people, as much as Snapchat connects you, those are solo ventures.”