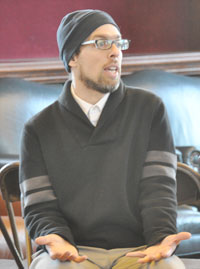 Where do stereotypes come from? Chris Messinger discussed some of the answers with students during assembly on Wednesday. Mr. Messinger is the executive director of Boston Mobilization, a youth serving non-profit that works with hundreds of teens each year.

“We all hold conscious and unconscious stereotypes inside us. However, there are ways to break stereotypes,” says Mr. Messinger. He shared steps that schools and students can take to build an environment that welcomes everyone, but also gives people the “space to build their own affinity.”

“It is important for schools to provide positive role models, instill high standards, and convey that diversity is valued,” he said. “All of this helps support students’ sense of belonging.”

Mr. Messinger spent three years after college as a community organizer and then three years as a classroom teacher in Boston. After that he became executive director of Boston Mobilization, a role he has had for seven years. During this time he co-authored the Speak Up! anthology of personal stories being used by independent and public schools around the country.