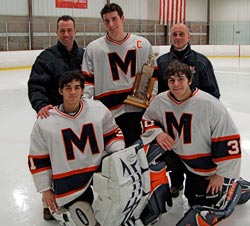 Recently Milton defeated Thayer 3-0.  This was Milton’s second victory over Thayer this season and the third in a row going back to last season. Following the game the Colin F. MacDonald III Trophy is given to the Outstanding Player of the Milton Academy – Thayer Academy Annual Ice Hockey Series. This trophy is presented in the memory of an outstanding young man and Thayer captain.

This year’s award went to Milton Academy captain Jeremy Deutsch (Lloyd Harbor, NY). Milton gave up only one goal in the two games this season and Deutsch served as the backbone of the Milton defense. The play of goaltenders Michael Baldino (Woburn, MA) and Thomas Tysowsky (Amherst, NY) in the Milton nets was also instrumental in the team’s success. This award is two years running for Milton as Deutsch joins Milton alum and current Yale blueliner Michael Matczak (Sewell, NJ) as back-to-back Milton recipients.

Colin F. MacDonald III, in whose memory the trophy was established, was a graduate in the Thayer Academy Class of 1976, a student with exceptional athletic ability and personal qualities rare in one so young. His desire for personal improvement, his steadiness, perseverance, humility, and kindness were conspicuous and remarkable. He was a model for all who knew him.